Things (and obstacles?) you should know when photographing Beijing…

Back in August, I spent eight days at Beijing to participate in a scientific conference. Needless to say that I also carried my photography equipment with me, because I’d never been in China before (nor even in Asia). As usual, I searched for possible spots in preparation of the trip, but to be honest, it was quite hard to identify interesting locations by means of the popular photo communities. Of course there were quite a lot photos taking during daytime, but I was especially looking for pictures during sunrise, sunset, or the blue hour, which is always a good choice when shooting cities. Though I really did not understand that lack of good pictures, I decided to collect the few spots that I’d found so far and to do the rest of scouting on site…

So much for the planning at home. At Beijing, I quickly discovered WHY there only very few photos that show touristic highlights light the Temple of Heaven during sunrise/-set or other imperial buildings like the Forbidden City during the blue hours… Here is my personal list of reasons which make serious photography in Beijing a little bit complicated (but of course not impossible!):

But especially the smog can also cause wonderful smooth colors when it is not too thick and the sun is able to break through! This brings me to my list of “good” locations, which I can recommend to everybody travelling to Beijing and looking for good photo opportunities:

The Great Wall of China

Last but not least, Beijing is not far away from the world-famous Great Wall of China! Already from the beginning of our planning we decided that we would like to a tour to the Great Wall. Of course, none of thouse standard half-day-tours to the crowded Badaling area including “typical chinese lunch”. We rather wanted to stay at the wall until sunset and to get most out of our day. So we contacted Rick from WildGreatWall Adventure Tours and hired a car and a driver for a whole day. The homepage offers great information about the possible tours and the contact to Rick was very nice and fast so we can really recommend this service! We planned to do a hike in the area of Mutianyu in the morning and another one at Jinshanling in the afternoon so that we can wait there until sunset. While the first hike at Mutianyu was already impressive, the second half of the day was almost oustanding. For us, Jinshanling offers much better scenic views and – surely the best thing – due to the late time we were nearly alone on the wall. Even though we had some smog on this day, I was able to shoot some nice views which you will hopefully like as well as I do. Our day at the wall lasted about 15 hours, whereof we spent six hours in the (airconditioned!) car and the rest hiking on the wall. With temperatures reaching 40 degree and the many ups and downs of the path, this day was quite exhausting, but certainly worth the money and everey drop sweat… So don’t miss it!!! ;-)

And my last advice:
If you are from Europe (or, to be more general, NOT from China), be aware that you might be the photographed subject yourself! Sometimes I really wondered whether the number of photos I took or the number of photos where I am the subject would be higher in the end… :-D 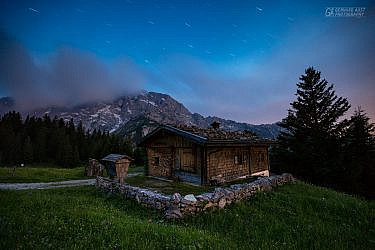 I just uploaded some more pictures from the area of Berchtesgaden, where we spent a weekend in June to make a Via Ferrata...