One Weekend at Usedom

On our way back home from Hamburg (I wrote about that recently) we stopped at Usedom for the first weekend of October. Of course this was not the direct way home, but after our “exhaustive” trips this year we decided that a little bit of relaxation at the Baltic Sea would be nice. The choice of Usedom as place for our short vacation was – of course – influenced by photography: Usedom offers two beatiful sea bridges at Heringsdorf and Ahlbeck! And I was able to find a hotel directly in the middle of the two villages, so that I would be able to walk along the beach in the morning… ;-)

On Saturday morning we went to the seabridge of Ahlbeck, which reminds me a little bit of the seabridge of Sellin at Rügen. The typical beach chairs made a very nice foreground interest and the sunrise was not spectacular, but offered some nice pastel shades in the sky.

In the evening, we drove to Świnoujście in order to capture the sunset at the mole, but as we arrived there a fog bank mady any photography impossible. It’s really funny, but only two hours later the fog was gone and we could enjoy some nice fireworks directly at the beach in front of our hotel, which were made because of the German Unity Day in each village along the coast of Usedom. I decided to enjoy the fireworks without my camera, so I’m not able to show any pictures to you, but believe my, it was really great!

On Sunday morning I went to the second seabridge at Heringsdorf. It might be not as beautiful as that at Ahlbeck, but it’s great advantage are those poles in the sea left of the bridge which make a nice foreground interest. When we visited the location on the previous day, I immediately knew that I would have to go INTO the sea to get a nice composition… Accordingly, I got up early and left the hotel in my swimming trunks and a warm pullover and jacket and went to the seabridge. When the light became interesting I brought myself to go into the water, a very nice experience with air temperature being about 12 degree and water temperature about 14 degree! Fortunately the sea was quite shallow without much waves and the water only reached my hips. Alltogether, I have been standing in the sea for half an hour, trying different compositions and – to be honest – it was real fun! I tried to underline the calm water with my ND1.8 neutral densitiy filter to extend the exposure time and – as always – use a neutral density graduated filter to stop down the sky a little bit…

Waiting for the light…

Finally the sun came through the clouds!

It was really a perfect short trip with two very nice locations, great weather and nice walks on the beach! 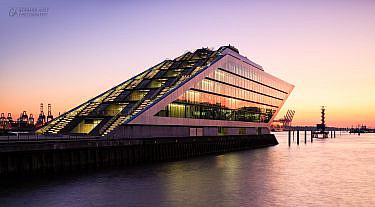 Just as last year, I made a short trip to Hamburg in the last week. This time I spent both days with paddling through...